Agriculture sector plays an important role in overall economic development of Bangladesh. Achieving the target of self-sufficiency in food is one of avowed goals of the present Government. To attain this goal, the Government has placed highest importance on the overall development of agriculture sector. Out of 17 SDG Goals 9 Goals are related with agriculture. The goal aiming at ending poverty and hunger in terms with SDGs is highly linked with achieving self-sufficiency in food. But the sustainability is not only linked with increasing food production but also with ensuring food security. Bangladesh being an agricultural country, mostly depends on the interventions of the agriculture sector as the contributions of the sector to GDP of the country is notably significant. The interventions are also important for determining food security and nutrition coverage for a large portion of our country people.

One of the major sub-sectors of agriculture is producing vegetable. It provides some of the essential micronutrients in our body. But the main obstacle in vegetable farming is the pests and the insects. Just these pests and insects alone reduce the production by 25%. This situation makes the cultivators depend on toxic chemical pesticides are in the dominant control tactic for managing agricultural pests in Bangladesh and there was a 5-fold increase in the use of all agricultural pesticides (insecticides, herbicides and fungicides) between 1990 and 2010. In this same survey the use of insecticides increased more than 20-fold. In order to control diseases and insects, farmers use irregular, unplanned and expired pesticides which do not destroy the harmful insects but make them tolerant to the pesticides and they have to use more and more pesticides. This results in financial loss as well as destruction of beneficial insects and increases the impact of harmful insects. This is detrimental to the ecosystem on the one hand and on the other hand this is very much troubling because insecticides are generally more toxic to human health. Neurotoxin insecticides, such as Organophosphates and carbamates, comprised 60.4% and 28.6%, respectively, of all pesticides in the survey. Many of these insecticides have been banned or severely restricted elsewhere in the world because of known health impacts that include Non-Hodgkin lymphoma, leukaemia, lung cancer, aplitic anaemia, fatal death, hormonal changes, birth defects and abnormal sperm, ovaries and eggs in humans. However, most of the problems mentioned can be solved by producing non-toxic vegetables.

With an aim of developing the value chain of safe vegetable and spice production, Ghashful as the partner of PKSF initiated the PACE project in 2017, at Hathazari Upazila of Chittagong District. The purpose of this project is to increase income of the farmer through value chain development of safe vegetable and spices production, especially red chili. Usually different kinds of traps (Pheromone Trap, Yellow Trap, Light trap, Trico grama Trap etc.) are used instead of any toxic chemical fertilizer. using these traps, insects will not be able to attack the crop and because no pesticides is used so the crops are not poisonous. It helps to restore the bio diversity of the land as well.

To increase the income of the farmers through value chain development of safe vegetable and spices production, especially red chili.

The value chain project connects farmers with various dealers, company representatives, government agriculture departments, buyers and organizations to solve technical problems, as a result, the farmers are able to go to the concerned person to solve their problems. Moreover, for useless and less harmful fertilizer and pesticides, farmers are being able to get higher prices with low production. Even after the end of the project period, the farmers will be able to stay engaged in safe vegetable cultivation on their own.

Future Plans of the Project

In order to brand Hathazari red pepper under Pace project red chili cultivation are being exhibited for cultivation at farmer level. Various activities are being conducted regarding training, issue based discussion and wide publicity. By implementing various activities to ensure the quality of processing this sweet chili pepper, it is possible to gain the confidence of the buyers. Hopefully the initiative will lead to success. The concept note of the project prepared by PKSF also shows that in the current market system there are initiatives to increase production as well as alternative market connectivity. Therefore, in the implementation of pepper processing initiatives under the value chain activities can also create competition in the sub-sector. New technologies, market theories and uninterrupted services need to be ensured for the farmers. In addition to our own supply chain, the concept note also includes plans for branding and marketing of products in international and national markets through PKSF.

Muhammad Sarwar Morshed has established himself as a successful businessman in Hathazari, Mekhal. In early 2016, Sarwar Morshed decided to establish himself as an entrepreneur in agriculture. He found out about the “Expansion of high value Fruit and Crop Cultivation Technology at Entrepreneurial Level” project through “Ghashful” ENRICH Project by doing research in different places. Later he learned about the various details of fruit cultivation by taking various trainings regarding the project. He established a foreign mixed orchard on 49 acres of land next to his house. The project provided 19 Bhari varieties of dates, 22 coconut saplings and 4 avocado fruit saplings. He later hired a monthly salaried employee to take care of his orchard. At present the plants in his garden are mature enough and the fruits will start appearing shortly.

He has planned to plant 12 varieties of date palms on 210 acres of land. He thinks his garden in the future will occupy the fruit market of Chattogram. He expressed his gratitude for the supportive role of the Ghashful behind his success of becoming an agricultural entrepreneur. Other farmers in the village are fascinated by his garden and are constantly trying to follow to his example. 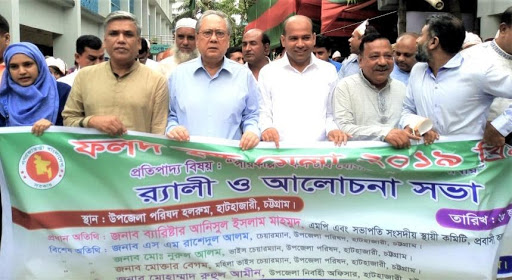 Ghashful participated in the 7 days long Agricultural and Fruit Fair in Hathazari from 28th July to 3rd August 2019. The fair was jointly organized by Hathazari Range and Chattogram Forest Department at the Upazila Parishad premises. On 28th July the fair was inaugurated by the Chief Guest, Chairman of the Standing Committee on Ministry of Expatriates Welfare and Overseas Employment Barrister Anisul Islam Mahmud MP. The theme of the fair was “Planned fruit cultivation will provide nutritious food”. After the inauguration of the fair the District Executive Officer Mr. Ruhul Amin presided over a meeting held at the Upazila Parishad Auditorium. Among special guests at the meeting there were Upazila Parishad Chairman S M Rashedul Alam, Vice Chairman Nurul Alam Basek and Moktar Begum Mukta. The Chief Guest mentioned in his speech that the present government has been earnestly working for the development of the farmers and agriculture. Master of the ceremony was the Upazila Implementation Officer Niaz Morshed. UP Chairman Salauddin Chowdhury, Khorshed Alam spoke at the meeting among many other guests. Ghashful participated in the fair and highlighted the activities of Value Chain and Technology project implemented under PACE project of the organization with the help of PKSF. 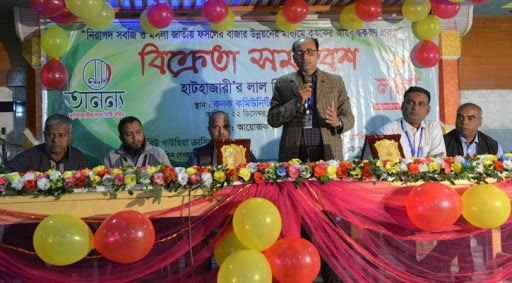 “Lanka” and “Ononno” brands of red sweet peppers produced by local farmers under PACE project implemented by Ghashful in collaboration with PKSF is now available in local markets. With help of Ghashful the event was organized by the owner of M/S  Haji Monu Mia Crushing Mill, Mohammed Saber and the owner of New Gawcia Crushing Mill, Mohammed Musa Sawdagar to honour the vendor for the sweet chili pepper of Hathazari. The event took place on 22nd December at the local community centre. The meeting was inaugurated by the Deputy Director of Microfinance and Financial Inclusion Department of Ghashful Mr. Lutful Kabir Chowdhury and master of the ceremony was Mr. Nasir Uddin- Manager of Microfinance and Financial Inclusion Department. During the event the Sales Manager from Agrobed Company Limited (North), Mr. Jashimuddin Talukder and Chairman of Hathazari Press Club Mr. Keshav Kumar Barua was present.   During this time “Lanka” and “Ononno” brand sellers were rewarded with first, second, third crest and certificate. In total six vendors were awarded. For “Lanka” the recipients of the awards were Chittagong Krishok Bazar (1st), Mohammed Akteruzzam of Akter Store, Chipatola (2nd) and Md. Forkan of Shah Amanat Store, Egaro Mile, Hathazari (3rd) and for “Ononno” Krishok Bazar of Chittagong, Panchlaish (1st), Didarul Alam from Maa Departmental Store, Chanmari Road, Lalkhan Bazar and Mohammed Arman of Khaja Store, Deyar Nogor, Hathazari (3rd). Over hundred vendors attended the meeting. The event ended with a pleasant cultural program.

With the assistance of PKSF, Ghashful has implemented PACE project in six of the Unions in Hathazari Upazila. Under the direction of PKSF, Ghashful has prepared a list of 220 beneficiaries who were affected by this COVID-19 epidemic. We are expecting that in the near future it will be possible to reach out to all these listed beneficiaries. Employees of the project in our working areas are in constant contact with the beneficiaries and providing necessary advices.